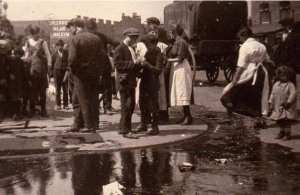 MOLLASSINE
I have been shown two photographs from the 1920s -one of them shows what appears to be a factory yard, taken from above, the other shows a crowd of people standing in the road. In both the ground appears to be covered with something black, and shiny. The place can be identified because the crowd are standing in Blackwall Lane in Greenwich – since the distinctive frontage of the Inland Lino Works and an advertisement for them can be seen in the background.

I have a fair idea what is being shown in the pictures –3,-000 tons of molasses had escaped from a tank and was making ‘its ponderous and inexorable way into Tunnel Avenue’. Try as I can in the local papers I cannot find the date of this incident which must have taken place in the late 1920s. The little I know about it comes from ‘A History of the United Molasses Company Ltd.’ by W.A.Meneight He pointed out that such a spill was not useful in an area where ‘trams were served by a conductor rail running in a gully between the lines’ and, as he also said, cold 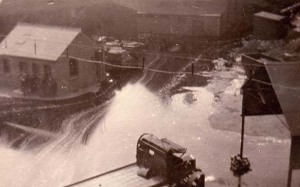 molasses is ‘implacably indifferent to force’. Someone must have had a terrible job cleaning it all up.

The molasses was the raw material used by the Molassine Company which had a riverside factory on the west side of the Greenwich peninsula – their site is now largely covered by Hays and Amylum. In October 1999 we published an article about them in the Greenwich Industrial History Newsletter and included some reminiscences from John Needs.

The Molassine Company was founded in 1900 to exploit a secret formula for animal food – Molassine Meal. The recipe came from a mysterious east European called Arthur Stein who vanished in Prague during the Second World War and has proved untraceable ever since.

A company share certificate from the 1930s illustrates an astonishing range of animals apparently co-existing on farmland alongside a lake – hens, cattle (roughly the same size as the hens) sheep, horses, ducks, dogs and so on. Also included are a shepherd, in smock with a crook, and a man – or is it a lady – feeding an apparently grateful horse. Their trademark shows a large hairy beast – presumably highland cattle – whose horns advertise the company products. He is supported by a horse and bull, with a horned sheep below – but above is a fierce looking boar, nothing like the sort of porker you would expect at your local farm.

The Greenwich factory opened in 1908 using molasses bought from local firms and the first steel tanks were installed in Tunnel Avenue in 1910. The company’s main product was a feed for horses made from sphagnum moss mixed with molasses and magnesium carbonate. During the First World War this was used by soldiers as an antiseptic plaster for wounds.

Molassine had their problems . A shipment of the meal to Canada fermented in the wet hold of the ship and caused considerable damage – and the product was then banned by shipping companies for long voyages, hitting the Company’s export sales.

Over the years the cattle and horse feed mixtures remained very simple but considerable skill was needed in the mix. After the Second World War, as demand for horse feed fell, a new variant was produced called ‘Main Ring’ but sales continued to drop as farmers began to buy their own molasses direct.

The best known Molassine product was their dog biscuit ‘Vims’. This was made with ordinary flour and flavoured with aniseed. At one time posters and signs announcing that ‘Dogs Love Vims’ could be seen everywhere and many signs were permanent – making them impossible to remove without taking the whole window along too. Norman Wisdom films of the 1960 almost always included references to Vims, sometimes as part of the plot.

The company made another dog food called Stimo which was a collection of broken biscuits from the pink Vims range and from a white range of Pet Biscuits – which were featured in an advertising campaign using Petula Clark.

The yard sweepings from these products were mixed with rough pieces of sphagnum moss and sold as Rito, a garden fertiliser.

The animal feed business in Greenwich was closed in 1981 – to the relief of local residents who had never found the smell of the works particularly attractive. The machinery was transferred to Rumenco at Burton on Trent, where the products continued to be made. The company had been taken over by Tate and Lyle some years previously and the site went into use by other subsidiaries of theirs.

Since publishing the original article about the company in Greenwich Industrial History so a number of relics of the company have come to light. Alan Smith wrote to say that he had a silver pocket watch made in Switzerland with a Molassine trademark in enamel on one side. This had been presented to an Albert Smith, perhaps as a token long service, or something similar. Later on we had a letter from Steve Foster who had a tin Matchbox with the Molassine Trade mark on the front – while on the reverse side was a ‘reclining naked lady holding a tray or plate with one elbow resting on a Pig’.

Today there is a large red stone office block in Blackwall Lane which is said to have been built by Molassine – although I have never seen any actual details of this. Behind it are a number of large tanks. I cannot believe that these are the same tanks which stood there in the 1920s and which leaked so dramatically into Blackwall Lane and which Molassine’s publicity department described as a landmark on the river, although it might be a good story to say so. To local people the most notable thing about the factory was the smell!