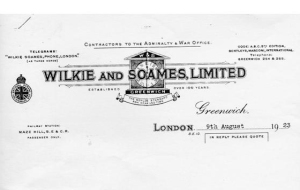 The manufacture of soap is an important part of the chemical industry and of significance in nineteenth century London. The Thames Soap Works, on the site of what is now the Amylum refinery, was owned by a company called Wilkie and Soames. (the Amylum refinery is of course long gone and this is now a derelict site)

In the early nineteenth century London soap makers were taking advantage of new manufacturing processes and ideas as well as using abundant supplies of raw materials from south seas whaling and the products of colonial exploitation, like coconuts. All of the biggest and most profitable soap works were in London and they flourished along with the closely related candle making industry.

The Soames family had had a soap works in Wheeler Street, Spitalfields, 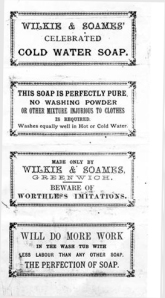 since 1809 but their original partner, Mr Wilkie, had died in 1821. (Kentish Mercury June 1890). Their Spitalfields works was the tenth largest soap works in the country but the need to expand – and maybe the construction of Commercial Street – persuaded them to move to Greenwich.

The Soames family had lived in Greenwich and Blackheath for many years. James Soames had moved to the Red House in Maze Hill in 1849 while his son, another James, was in charge of the soap works. His brother, Henry Aldwin Soames, who also lived locally was a ‘Russia merchant’ – probably an importer of Russian tallow, another raw ingredient of soap.

The Soames family were dominant in Greenwich church life. William Aldwin Soames was Vicar of Greenwich and James Soames, Jnr., paid for the building of a new church in the expanding East Greenwich suburbs. This was St. George’s Church in Kirkside Road, Westcombe Park, and the living went to another brother, Henry Kolle Soames. (‘Soames family’ much
of this information about the Soames family is taken from Neil Rhind’s ‘Blackheath Village and its Environs’ )

Several Soameses were active in Greenwich politics. James Soames held local office, and his son, Walter, was Mayor of Greenwich before the First World War. They took part in local electioneering – and as late as the 1920s the company made an advertising film hoping to influence the General Election. Walter’s daughter, Olave, was to become internationally known by marrying Baden-Powell, and becoming Chief Guide.

Morden College Trustees were clearly impressed when James Soames approached them for an under-lease on part of the Holcombe site. They had already had numerous dealings with the Rev. William Aldwin Soames on various local charitable causes, including the construction of Christ Church, East Greenwich and expected high standards of such an important local family. When bricks for building the soapworks were made on site the College waived the usual royalties.

The Thames Steam Soap Works – later Thames Soap and Candle Factory – was highly profitable. It employed more than 140 men and boys and James Soames boasted that he contributed to good works in the neighbourhood from the money he made. In 1864 the works had special departments for glycerine and paraffin as well as soap boiling and candle making. There was a laboratory, stables and maintenance department, separate toilets and canteens for men and women workers and housing for the gatekeeper and housekeeper. (This description comes from an assessment undertaken for Morden College)

The company’s slogan was ‘Greenwich the world standard in both soap and time’. The soaps included ‘Apron’, ‘Big Wilkie’, ‘Spry’, ‘Wonderful Washer‘ and ‘British Carbolic’ – no-nonsense, heavy-duty cleansers for the hardworking housewife in her war against dirt and disease. They also made candles – Greenwich Sperm and Stearaffine. (slogans and advertisements from Messrs. Unilever)

Towards the end of the nineteenth century Wilkie and Soames ceased to be an independent business. New, giant soap companies from the north of England threatened the older London industry. Wilkie and Soames fought off take-over bids from 1902 onwards but were eventually swallowed up by Unilever who closed the Greenwich factory in the 1930s. (Charles Wilson, The history of Unilever, London, 1954). Some traces of the soap works remain 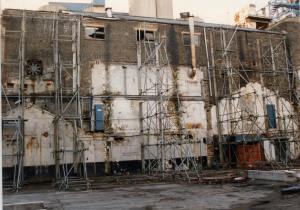 inside the Amylum factory where a couple of old walls – much shored up – still advertise Thames Soap Works. (These walls have of course now gone – demolished with no warning by a French demolition crew. However I have to thank Ian Turner and Messrs. Amylum  for a visit to the remaining wall
of the soap works, within their factory, and updates on the progress of the
scaffolding on it. The photograph comes from them)

The Soames family represented a type of industrialist that was not usual in Greenwich. Most local factory owners were content to let local events take their course – to use the workforce and its skills, and move on. Soames lived and worked in the community and tried to get it into their way of thinking – Church of England and Liberal although, to quote Neil Rhind, ‘James Soames gift of a church to the community was to some extent inspired by nepotism‘. This style of philanthropy was to be made famous by another soap manufacturer, William Lever at Port Sunlight. Lever was to quarrel about treatment of the workforce with George Livesey, whose co-partnership scheme at the East Greenwich Gas Works is described in a later chapter.