Advertisement from The Kentish Mercury 28th October 1865.  The Star in the East is now the electrical dealer, Ranworth, next to the northbound Blackwall Tunnel

The following article appeared in The Railway Magazine during the 1970s. It is reproduced with their kind permission – and with my apologies to them, the author and the readers for any mistakes from in a scan from a very smudgy photocopy

INSIDE the Royal Exchange in the City of London are paintings or memorials to most of the founders of the famous institutions, many of whom are also commemorated by the names of neighbouring streets or buildings. An exception, John Julius Angerstein, is more familiar to Southern railwaymen than City gentlemen by virtue of the rail connection with the Thames-side wharf which bears his name. Angerstein was a Russian refugee who enjoyed a remarkable business career in the late eighteenth and early nineteenth centuries during which he persuaded the early marine under- writers to leave Edward Lloyd’s coffee house and establish themselves in the Royal Exchange. A philanthropist and art collector, his pictures formed the nucleus of the National Gallery after his death in 1823 at Blackheath.

Angerstein Wharf was constructed by a grandson of the “Father” of Lloyds and is well sited on the south bank of the Thames near Greenwich opposite the Royal Group of Docks, having a river frontage of 755 ft. In May, 1851 Angerstein obtained powers for the construction of a single-track railway, 79 chains long, from a junction with the South Eastern Railway between Blackheath and Charlton (opened July 30, 1949) to the Wharf. This was a rare, if not unique, instance of a private individual obtaining an Act of Parliament for railway construction, necessitated by the bridge over Woolwich Road. Opened in August 1852 the branch was leased to and worked by the SER from the out- set. The lease was renewed in 1853 and 1879 and the South Eastern finally purchased the freehold in 1898. The line was later doubled from a point just north of the Woolwich Road bridge and served various private sidings including a spur to the large South Metropolitan Gas Works. For years the SER signal works was situated near the junction north of Blackheath Tunnel: the Greenwich to Charlton line opened on January 9, 1873, passed nearby on bridge and embankment. A fine view of the branch stretching north across the Greenwich Marshes is obtained from this line just east of Westcombe Park Station where the southern approach motorway to the Blackwall Tunnel is also now crossed.

The tonnage handled at the wharf has varied over the years, reaching a peak by 1914. The quay is 400 ft. long and can accommodate six river barges, most traffic formerly being barged to and from vessels in the various docks. For years after the Second World War a big tonnage of Fullers Earth was exported via Angerstein Wharf involving regular freight trains from Redhill, worked through by “N” class Moguls via Tonbridge, Maidstone West and Gravesend. Imports included waste paper, timber, flour and  packed manure. In its November 1952 issue The Railway Magazine described an exceptional out-of-gauge’ load which had traversed the branch a few weeks previously. A catalyst storage drum 60 ft. long, 16 ft. 6 in. diameter and weighing 38 tons was conveyed from Charlton to the wharf on “Flatrol” wagon and floated thence down the Thames to the oil refinery at Grain. When loaded the overall height of the drum was 21 ft. 4 1/2 in and other rolling stock was dwarfed. A Port of London Authority “Leviathan” floating crane lifted the drum into the river.

There has never been a passenger service and it is possible that the only passengers to travel the line did so on the London River Railtour of the Railway Correspondence & Travel Society on March 29, 1958. A two-coach exLSWR push-pull set (No (657) hauled by ex SECR “H” class 0-4-4 tank No. 31518 made the journey. However in 1971 the Greater London Council investigated the possibility of an orbital or outer-circle suburban service and if this project ever reaches fruition trains would use part of the branch on their approach to a new tunnel under the Thames which would link up with the Eastern Region at Canning Town.

The last decade has seen several changes. Many of the private sidings have closed and Angerstein Wharf itself has been leased to the Thames Metal Company since 1964. Scrap metal, mostly for export 10 Bilbao in Northern Spain, is brought by the trainload from Hither Green Sidings via the Dartford Loop and Crayford Spur, much of it emanating from Southall, Wandsworth Road or the Ford Motor Co. Ltd. at Dagenham. The latter reaches the Southern Region via Temple Mills, Gospel Oak and the West London Line. The track lay out in the immediate vicinity of the wharf, formerly most inconvenient, has recently been redesigned and only one through line runs to the riverside. British Railways locomotives, usually class “33” diesel electrics, shunt the branch for about an hour each day in contrast to former years when an “01” or “C’ class 0-6-0 from Bricklayers Arms Shed was on pilot duty round the clock. The wagons of scrap are now handed over to Thames’ Metal’s private 0-4-0 diesel engines some quarter of a mile from the wharf. There are two active locomotives, one of 11 tons, by Motor Rail, the other of 20 tons by F. C. Hibberd & Co. The branch was electrified in 1959.

Two private sidings remain. Rcdpath Brown- Dorman Long receives constructional steel from Scunthorpe and Teesside and it was thought that some 8.000 tons were handled in 1972. Although the future of this traffic is in doubt, Murphy Aggregates forward sea-dredged ballast by rail in l00-ton bogie wagons and it is hoped that some 500.000 tons will be dealt with in 1973. Thus, unlike many other short riverside branches, including that to Deptford Wharf a couple of miles upstream which is but a memory-it is pleasant to record that Angerstein Wharf is still very much in business and likely to remain so for many years to come. In conclusion

Suhulet built 1871 out of service 1961 (definitely built in Greenwich)

Sahilbent built 1871 out of service 1961 (definitely built in Greenwich)
The vessel continued as a cargo vessel Kapitan Sucru and was burnt out on the Anatolian Coast in the late 1990s. The fate of her hulk not known – would be glad of info – she may be afloat and in use still!! 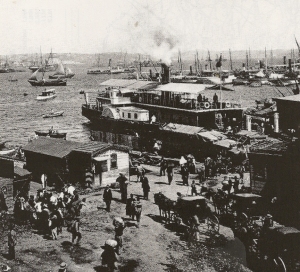 Return to Maudslay Son and Field